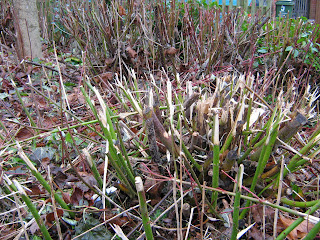 Like Plant Mad Nige, I'm feeling a bit peeved at the moment. No, not at farmers like he is, but my local council. It would appear it's our estate's turn to have its public planting tidied up. Don't get me wrong, I usually would approve heartily, but WHY did it have to include all the lovely red berried Guelder-rose providing food for the birds AND all the dogwood and Salix stems that are meant to provide our open spaces around here with some winter interest?


Surely the work plan this time around could have included just a quick tidy up of the dead or dangerous deciduous wood, plus all the evergreen trimming, followed by a visit in late winter (prior to nesting time and after the berries have been eaten) to complete the rest? They've made a good job of the evergreen stuff, even cloud pruning some of the nameless bushes we have - a nice touch above the ordinary don't you think? BUT we do have mass plantings of gold, green and red stems, which a couple of days ago were lighting up the gloom at three to four foot high, but now stand at a very battered and bruised one foot instead. I think someone somewhere's missed the point of what the planting's meant to be doing. If I'm missing the point on what the council's doing, please let me know.


I do understand our hard-pressed council have to look after Chippenham's open spaces on a rota basis, but surely it won't cost much more to schedule two visits? After all, there must be another part of Chippenham that's not getting its evergreens cut back at the optimum time of year.


Excuse me whilst I go and pop a more constructive version of this rant in the post...
Chippenham Grrr plants Public Planting