Be Kinder to Nettles? 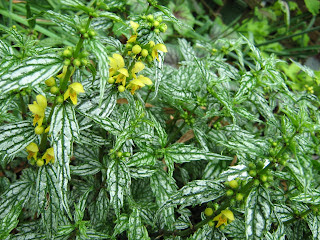 Unbelievably it's Be Kind to Nettles Week (14-25 May - note it's another example of time being stretched) and I don't think they mean the cultivated kind like the picture above taken in my garden yesterday, but the wild sort shown below from our neighbouring public land a few moments later. 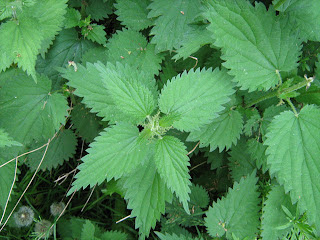 I don't think my niece will be celebrating, in spite of efforts by major organisations like the Natural History Museum in London. She fell into a bed of nettles at the age of four whilst we were walking in the Cotswolds (oh the inconsolable screaming!) and has had an aversion to them ever since, poor thing. There also appears to be a campaign against them up at the allotment at the moment as several patches (including 1 on my plot) look like someone's put weedkiller on them. It's a shame really as they are such a versatile plant. So much so that this author has found 101 uses for them. I already knew about their attractivess to butterflies, the foul smelling concoction you can make to feed plants, cooking nettle soup and the use of their fibre for clothing, but there's also nettle cordial, tea and beer, plus insect repellent, dandruff treatments, omlette flavouring and a whole lot more! Instructions for using nettles as plant feed/pest control, nettle soup and hair conditioner can be found here. It seems they may have their use medicinally too, so perhaps we all should be looking at this much maligned plant a little differently from now on.

Update: Mark (The Green Fingered Photographer) asked what my cultivated nettle variety is. It's Hermann's Pride aka Yellow Archangel. I've found it to be a great plant to grow - as you'll see in my comments. However, when investigating suitable links for this update, I found that gardeners have been warned not to plant it as it's invasive. It's not proving to have these troublesome characteristics in my garden, perhaps it's not in its perfect spot. I thought I'd better pass on this warning though.
Events pests n diseases plants