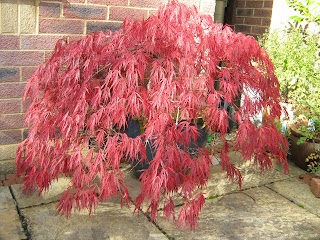 I first showed you my prized Acer in May, bedecked in its Spring finery. Now it's telling me Autumn's well and truly here. Not that it needed to prove that much to me - the gales and lashing rain of the past few days have been enough to confirm that summer (what summer?) is well and truly over and it's time to start collecting leaves for leaf mould making.

NAH and I have had our annual battle over when to put the central heating on. I take my old school's stance of no heating until October - a woolly pully should be enough for daytime and there's always the winter weight duvet to be pulled out of the cupboard to snuggle under at night. I finally caved in on Saturday. We called it honours even - we'd lasted until October, NAH had had a month of complaining he's cold.
Garden NAH plants