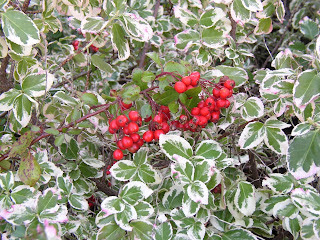 Euonymus fortunei ‘Emerald Gaiety’
This is a popular evergreen shrub in many gardens round here as it likes limy soils and is drought tolerant. It’s also tough as old boots, so often forms part of municipal planting schemes. It comes in a wide variety of other forms and colours, such as this ‘Emerald n Gold’. Just because it’s common as muck, doesn’t mean it should be sniffed at. I like to use it as a structural shrub that comes into its own over the winter months, cheering up the garden. It can also be clipped into bold shapes or trained up walls or trellis to give some height.
In the photograph, it looks like the colour of the Pyracantha coccinea (firethorn) berries have ‘bled’ into the leaves of the Euonymus. This isn’t so - many of the varieties with white variegated leaves take on a rosy tint during the winter cold.
The Euonymus family also has deciduous varieties, such as Euonymus planipes, the spindle tree. These are spectacular in the Autumn, with fiery leaf tints and eye-popping red pods that split to reveal bright orange seeds, attractive to the wild bird population.
Check out Mrs Nesbitt's Place for other ABC Wednesday postings.
ABC Wednesday Garden plants