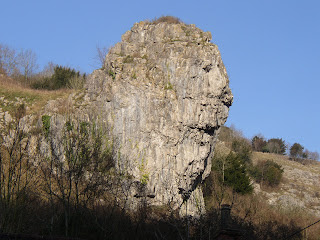 It's Half Term in Yorkshire, so we've had my Brother-in-Law + family to stay with us for the weekend. It's always lovely to see them and rediscover parts of the area we'd forgotten about, such as Cheddar Gorge yesterday (not to be confused with the game of the same name from the radio programme I'm Sorry I Haven't a Clue!). The picture shows Lion Rock, one of the well-known features of the limestone cliffs that tower 450 feet above the floor of the gorge.
Most of the gorge is a very special place, being a Site of Special Scientific Interest due to its karst limestone scenery and rare plants such as the Cheddar Pink. As it's limestone country, there are plenty of underground caverns and caves too. 6 of these are scheduled as ancient monuments as the remains of early British people have been found there (e.g. Cheddar Man from 9,000 years ago - DNA tests in 1997 revealed his descendents are alive and well in Cheddar!). Most of the 3 miles of the gorge has spectacular scenery, but unfortunately the village of Cheddar itself is rather spoilt as it's a bit of a tourist trap. We did manage to buy authentic Cheddar cheese sandwiches for lunch though, before wending our way back up the gorge. We finished the day with a scramble up the rocks then ice creams all round at Chew Valley Lake nearby - a great place for birdwatching.
Bits n Bobs