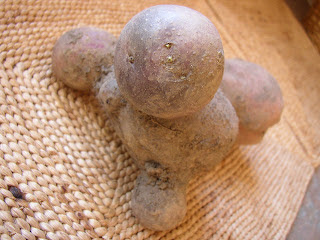 Not content with telling you about National Chip Week, I've found out the UN has seen fit to declare 2008 as the International Year of the Potato. They're covering several bases however, as it's also the International Year of Languages, International Year of Planet Earth and International Year of Sanitation. The latter forms part of the International Decade for Action, Water for Life 2005-2015, so I guess that makes it the most important of the lot.
Anyway, let's focus on the potato, especially as it gives me an excuse to show you one of my Sarpo Axona from last year. It not only scores well for blight resistance, it's also my best comedy vegetable so far. On a more serious note, the UN are using the humble potato to:
'...raise awareness of the importance of the potato - and of agriculture in general - in addressing issues of global concern, including hunger, poverty and threats to the environment.'
The quote's from the UN potato link above, which is a very good website. You may also like to take a look at the British Potato Council's site too. They both provide lots of potato facts and fun as well as delivering a serious message about one of the world's staple foodstuffs.
Allotment Food n Drink Fruit n Veg