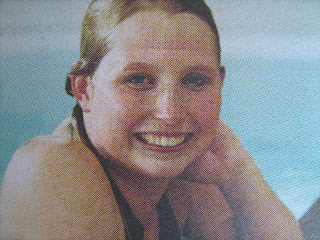 Early this summer my beauty sleep was regularly disturbed by NAH getting up at the crack of dawn to go swimming at Trowbridge pool. Our local swimming star, Stephanie Millward was in the final stages of her preparations for the Paralympics and invited NAH to go training with her.

NAH's known Stephanie for about 15 years. She was the star of our local swimming club: her international swimming career had just started and her goal was to compete at the Olympic Games in Sydney when Multiple Sclerosis struck. That put paid to swimming. Then to add insult to injury, she had a High Court battle to get the (then new) wonder drug Beta Interferon prescribed to help with her condition. During this time NAH lost touch with her, but bumped into her earlier this year when she started training with the club again. In the intervening years, she's not only had to battle to get the right treatment, she's also had to learn to walk again as the condition had worsened such that she was confined to a wheelchair for a time. It's great to see her literally back on her feet and doing so well at swimming again.

So NAH joined Stephanie for the early morning training sessions and I got a toned and reshaped husband back for a while. However, she soon moved on to training in Swansea with her specialist Paralympic Coach and the rest of the team. I'm not quite sure who was more relieved - me as I was no longer woken up at 5.45 every morning, or NAH who was getting thoroughly knackered with all the training.

We both shouted ourselves hoarse during the Olympics a few weeks ago. But it's nothing like the cheering we'll be doing this and next weekend as Stephanie steps up to the starting blocks for her events.