ABC Wednesday – J is for… 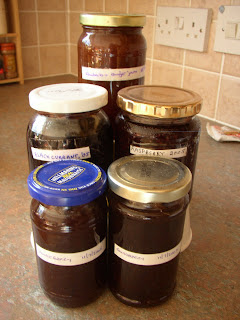 Or Jelly for those of you reading this across the Pond. 2005 was rather a good year for soft fruit in VP’s family and we’re still eating the produce. I made the gooseberry and rhubarb & ginger; NAH’s mum gave us the raspberry and blackcurrant ones. We’ve also done a rather nice line in recycled jars don’t you think? The rhubarb & ginger was made on the hottest day of the year – temperatures were well in the nineties. I was ready to melt by the end of it all.

Click here for raspberry, blackcurrant and gooseberry jam recipes; or here for the rhubarb & ginger one. In my usual style I don’t bother with the crystallised ginger but use a little more root ginger instead. Taste any of these for an instant summer.