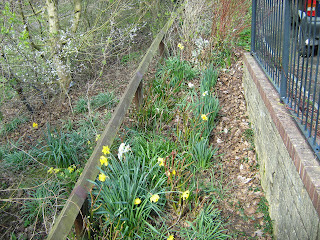 Work in Progress - Cornus pruning in the front side garden. You can also see where the public land begins on the left - land ripe for Guerilla Gardening...
Do you get kind of twisty about your garden at this time of year and want to change everything? Me too. The cure? Get on with spring cleaning the garden, especially pruning. My perennials have been cut down to let their fresh green growth stretch into the newly created space. The late flowering Clematis are cut back to newly sprouting buds. My climbing roses were cut back to their framework branches in February. The final job is to prune the shrubs such as Hypericum, Potentilla, Perovskia, Fuchsia, Teucrium and Cornus. I completed the job today - a little later than most years, but the recent cold weather has held things back a little. In doing so I've realised that there are several key stages to my approach with these shrubs:

1. The Nervous Nibbler
A bit of a twig here, a shoot there. The odd dead branch removed. A secauteur job only. 'Oh I don't want to hurt you, my precious' runs through my head as I go.
2. The Reckless Hacker
Right I can see what's what now. Everything's criss crossing each other, so must go. Let's get out the loppers, oh and this pruning saw's needed too.
3. OMG what have I done?
This stage is reached usually when my pile of prunings on the patio is approximately the same size as my house. Oh dear, is that tiny stump all that's left?

5. There that's much better
A state reached a few months later when the stump from stage 3 has magically transformed into a fully grown shrub again.

The Constant Gardener has a different approach - she thinks it's a more artistic activity. 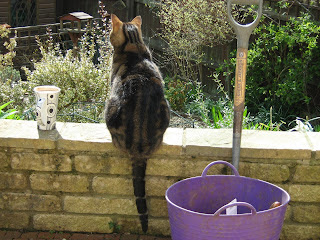